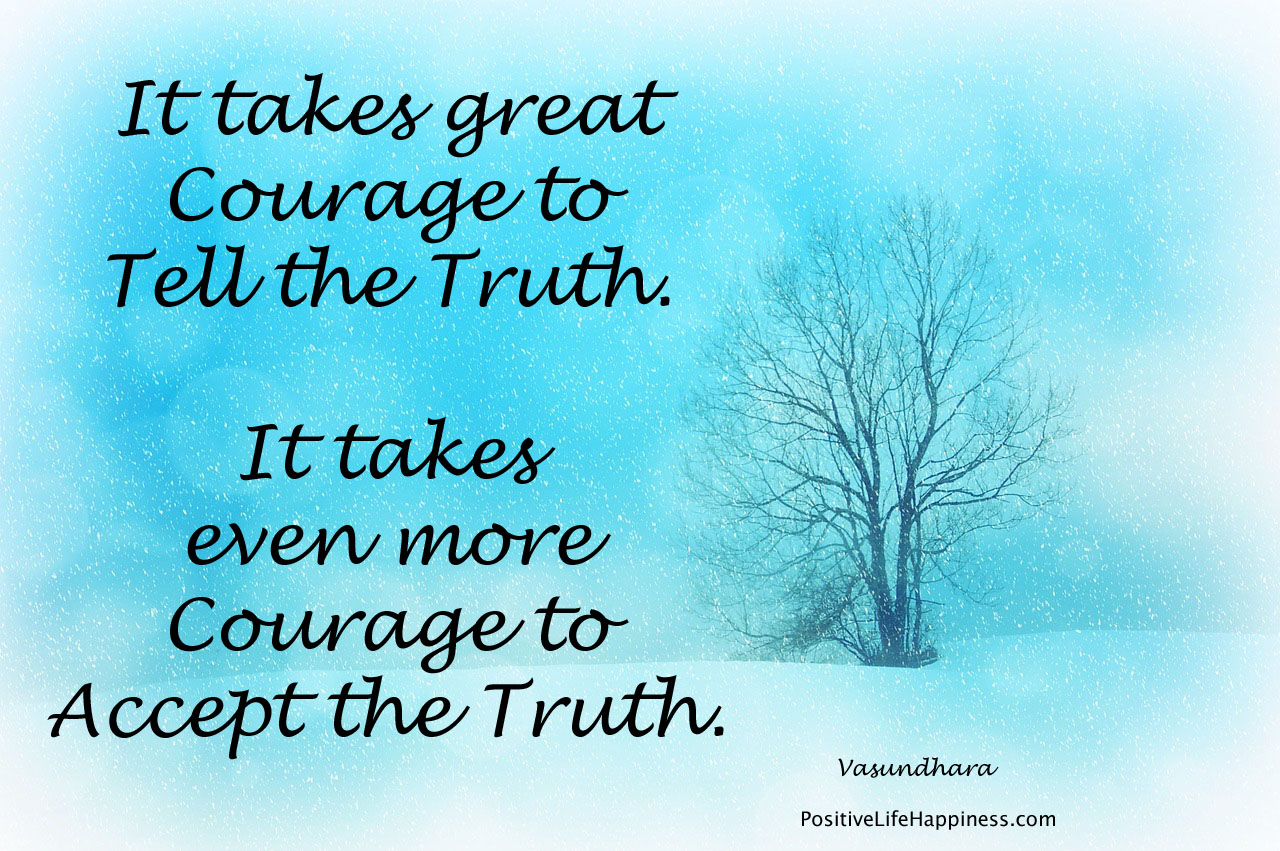 Let me explain a little bit more about these two sentences.

First, let’s take the sentence, “it takes great courage to tell the truth”.

Telling the truth to someone, knowing that the hearer may not like it, is one of the most difficult things to do.

Let me start with this example.

Let’s say you are a well-wisher of a person. And you see or feel that something that person does to their appearance is not becoming on them, or consider that something they do is not good for them. Your concern or opinion may be about their nature, their appearance, or a habit they have, or the way they live, or the company they keep, or their values in life, or their lack of physical fitness, or their behavior or something else.  Or they may be gullible and too trusting, and so they may be conned by someone, and you may want to awaken them about it.

However, if you really love someone or care about them, you should tell them the truth, right?  Because, telling the truth does good for both the parties, the teller of the truth and the receiver of the truth, whether they know it not.

For the receiver of the truth, it shows who their good friend is and who really cares about them. Initially, they may be irritated or angry, but eventually they will know the truth.

For the teller of the truth, it sets them free. They no longer have to feel guilty about not telling the truth to a friend or loved one. Their mind becomes light and airy, and the heart is filled with warmth that they did a good deed for someone.

However, everyone knows that even though in theory all this sounds easy,  in practice it is very difficult.

We are usually reluctant to tell the truth to a friend or loved one because of the fear that we may lose their friendship, camaraderie and love.

We are reluctant to tell the truth to the pubic because of the fear that we may lose popularity and any benefits we may get from it.

So, to overcome all this and tell the truth, it takes great courage.

Now let’s examine the second sentence, “It takes even more courage to accept the truth.”

What does this mean? Someone may tell you the truth about you. Let’s say that person is your well-wisher. And they see or feel something that is is not good for you or is not becoming on you.

Somehow, they muster up the courage to let you know about it and they do so. Now, is it easy for you to accept it? No.

Now, when you compare them, telling the truth seems a lot easier than accepting the truth, isn’t it? Because, no one likes to admit that there is a flaw in them, or that they have a bad habit, or they made a mistake about something or they were stupid about something. It takes great courage to accept the truth and be willing to fix the problem in themselves.

Let me give you one more example to explain this a little further.

People assume certain things in their life to be in a certain way. But in reality, something else may happen.

They may think they have perfect health, but suddenly they may be told that they have a disease or illness.

They may have certain traditional values in life, but find that their son or daughter is totally different and has personal preferences that don’t go along their feelings and views, which may be shocking to them.

One may be an alcoholic or addicted to drugs, and may not want to admit that they have a problem. So, it really takes a lot of courage to accept the truth.

That is why I say that,