Double Standards is a main cause of misery in the world

Double Standards is a main cause of misery in the world 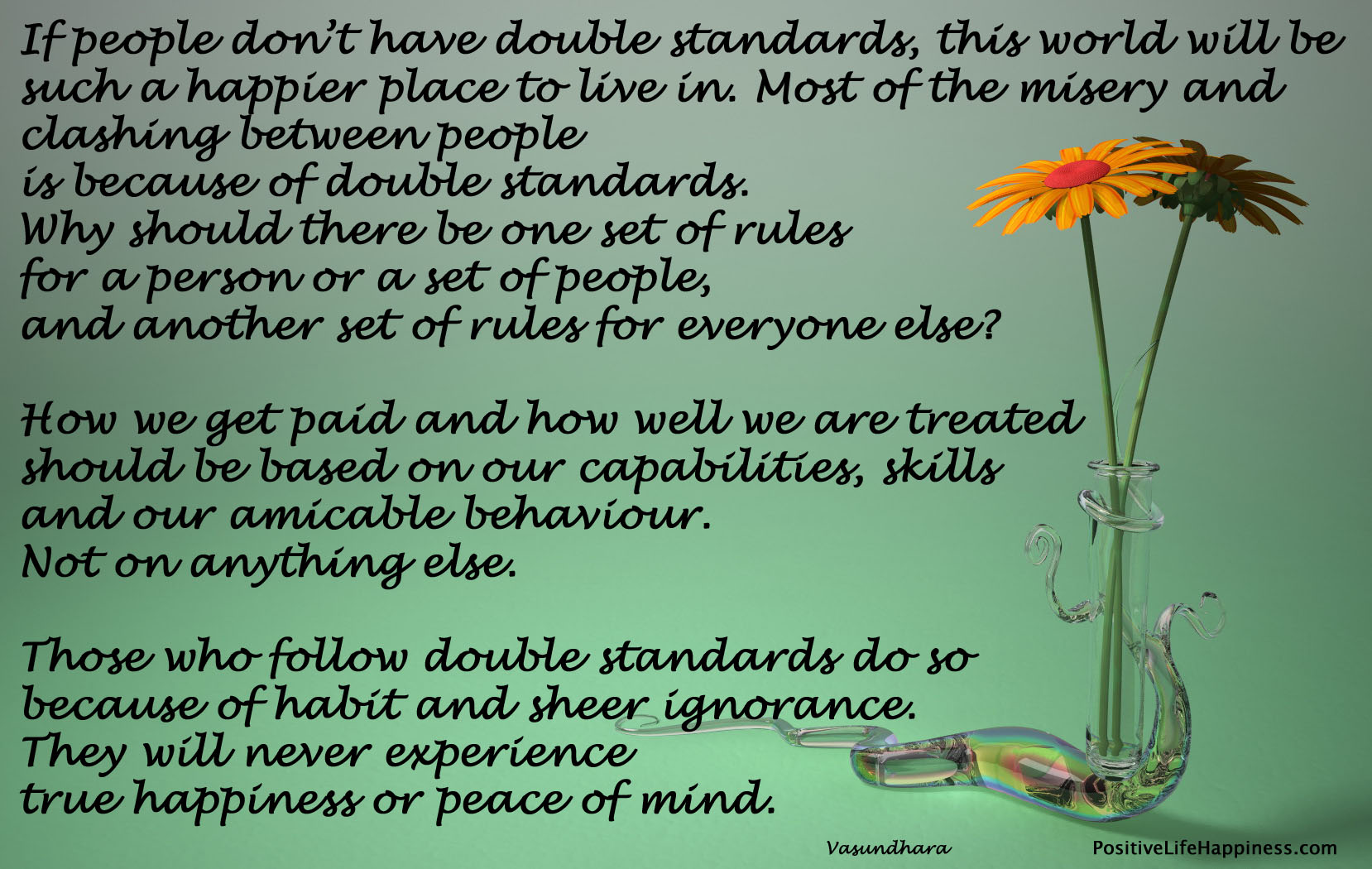 Double Standards is one of the main reasons for misery in this world.

If people don’t have double standards, this world will be such a happier place to live in. Most of the misery and clashing between people is because of double standards. Why should there be one set of rules for a person or a set of people, and another set of rules for everyone else? How we get paid and how well we are treated should be based on our capabilities, skills and our amicable behaviour. Not on anything else. Those who follow double standards do so because of habit and sheer ignorance. They will never experience true happiness or peace of mind.

Let me explain this through a story.

There was a small town and in that town, a Councilman was showing favoritisms to those who made him richer and powerful. The elections were coming and a few people in that town wanted to get rid of this Councilman. They were a police inspector, a small store owner, a clerical worker, a young gas station owner and a nice lady who was socially prominent. They all got together and started discussing about electing a good ethical person who will think of the good of the town instead of selfish individual profits and power. The police inspector suggested someone they all knew well. They all considered him for the position and decided that the best candidate would be this good, honest, intelligent man, an accountant who worked a simple job but had enough time to contribute to the town as a Councilman.

They met with the Accountant who was at first reluctant to take up the venture. He said that he had no experience as a politician. But his four friends and supporters convinced him that the reason they selected him was only because he was not a typical politician who shows favoritisms and works only for those who make him wealthy and powerful. They said he would be perfect for the job because he was honest, and so would only work for the good of the whole town and not for selfish individual interests. Then the Accountant agreed to run for the office of Coucilman.

And after a simple but effective campaign, the accountant won the election. And to celebrate the success, the prominent lady gave a small party which included the supporters of this candidate. They all individually congratulated the accountant who would be the new Councilman, and he in turn offered his thanks to them and promised that he would work for the good of whole town.

And as they were relaxing, the small store owner approached the new Councilman, and said, “I am glad that I voted for you. By the way, did you know that there is not enough Bus Stops in the main street? It would be really great if you could put up a Bus Stop in front of my store. I just wanted to mention it. Thanks!”

And as soon as he left, the clerical worker approached the new Councilman and said “I was waiting to talk to you alone. You know, I was your main supporter.  Please visit my humble clerk’s office sometime. However, when you come you will notice that my office is old and dilapidated. It would be great if you could direct some of your funds to renovate my office. I would appreciate it.”

When he went away, the new Councilman was dismayed and when he was still trying to absorb what had just happened, his third supporter, the young new gas station owner casually sauntered to the Councilman. He said, “Hi there! How is everything? You must be really happy that you will be working for the good of the town. And speaking of good of the town, did you know that there are important roadways that are still unpaved? Take for example, the rough road where my gas station is. It keeps the drivers away because of its bad condition. I just wanted to ask you to direct some of your funds to have this road paved and fixed.”

After he left, the new Councilman felt that he need some fresh air to think and understand what he has got into to. So he slowly left the room, and sat on the bench in the front porch. The police inspector, noticed the troubled and perturbed look on his friend’s face and came to the porch himself. He said, “You look tired. I guess this election efforts and finally winning the election has drained some of your energy.”

The New Councilman replied, “No, it is not the election that is bothering me. But I am puzzled by the behavior of our three friends and supporters. They told me that I should become a Councilman because I will work for the whole town and not show favoritism to anyone. That was their main motto for this election campaign. However, after I won, just now, everyone of them came to me one by one and wanted me to do something special for them individually. That is what saddens me and puzzles me.”

The Police Inspector said, “Well, you see, it is because people believe, that favoritism is only something that is shown to other people. It becomes okay when it is shown to themselves.”

The New Council man remarked, “Oh I see. But how do I perform my duties righteously for the good of the whole town without hurting the feelings of these friends and supporters?”

The Inspector answered, “Just remember why you got elected, and that is to serve all the people in this town. Make these people understand that when you work for the good of all the people of the town, it will end up being good for these individuals too.”

The Inspector added with a big smile, “At least no one has bribed you so far!” The Councilman smiled, “Yes, that’s true!” As soon as he finished saying this, the nice lady supporter who gave this party for the Councilman came to them. She had a delicious Pie in her hands and she said, “I baked this just for you. By the way, I am in charge of the ladies club here. It is held in temporary places that are horrible. It would be great if you could find a nice permanent hall for us to meet and discuss our issues. Thank you so much!”

The Councilman remarked, “Well, there goes not offering any bribe!” They both laughed and joined the rest of the people celebrating inside.

We may all have our irritations and misgivings about certain people, communities, races, color, gender and so on. But we should have control over these feelings and emotions. We should not let these biases and prejudices affect our fair treatment of anyone. Everyone wants to be prosperous, happy and successful. We should understand this and treat everyone equally with the same respect and consideration. And Then this whole world will become a truly happy and peaceful place for everyone.