How to gain self-respect and self-confidence

How to gain self-respect and self-confidence 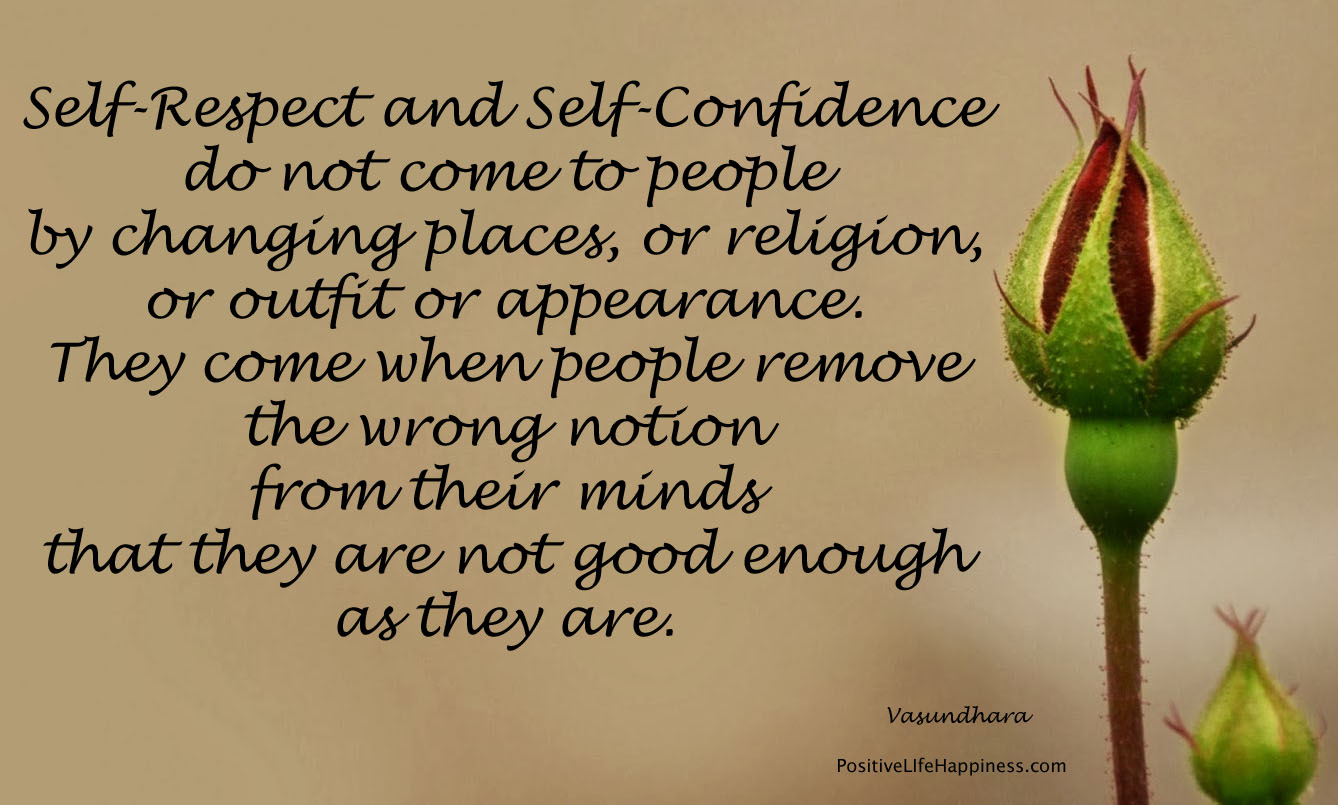 Sometimes people feel that they are mistreated by others. Of course, feeling low or not good enough, can be influenced by external factors. It can be certainly enhanced and fueled by society, by environment, and the mean and insensitive people around. But ultimately, it is we who define who we are, and determine how respectable and lovable we are.

When people do feel that they are not good enough as they are, they try to fix it by changing certain external factors. They join a new religion, change their outward appearance, and pose to be something different from before. They blame everyone and everything else for their lack of self-confidence and self-respect.

But the truth is that, Self-Respect and Self-Confidence do not come to people by changing places, or religion, or outfit or appearance. People can fool themselves for a while, but sooner or later, truth will assert itself. Self-respect and self-confidence  will come only when people remove the wrong notion from their minds that they are not good enough as they are.

Most of the times people think that the problem for our lack of self-confidence is due to external causes. But the truth is, no feeling, emotion, or sentiment comes from outside – positive or negative. The major reason for lack of confidence is an inferiority complex, which could be due to one’s inherent nature, or developed because of others.

One important thing to remember is this. People will respect you, only if you respect yourself. If you think you are not good enough, and berate yourself, chances are you will be treated the same way by others. The respect you show yourself, is what you will get from others.

Negative thinking is a bad habit. Habitual thinking is really an addiction, which is the worst of all addictions. It is the same way of thinking and living without changing for the better. Being too lazy and mentally weak, people do not want to make an effort to change it. They would rather be in the same rut, rather than helping themselves to live a fulfilling life and facing the problems of the world courageously.

But when a little effort is made, and the “thinking mistakes” are understood, self-confidence and self-respect will sprout and grow. There will arise a new, fresh, happy feeling in the mind. “I am not nothing! I am something! I am not a useless, inferior person, a nobody! I am as important as any one else, a somebody! I too have a purpose to be in this world and I have every right to live like any one else and follow my aspirations!” These kind of positive thoughts and repeated reinforcements should be kept in mind. This will erase the existing negative attitude.

So, what is the effort to gain self-confidence and self-respect? Constantly listening to inspiring and motivating words – not hollow words, but words that make sense. Continuously reflecting on positive thoughts. Paying attention to common sense. When feeling diffident or disrespected, making a conscious effort to look for rational answers, instead of wallowing in self-pity and an inferiority complex. These will help a great deal.

It may not seem easy to start with, but once this process is started, gradual effort in baby steps will gradually produce successful results. Because you will end up feeling that you are just fine as you are. Only thing is, you have to believe in it. So, just believe it! You are great as you are.